Nurhyme Games is in Development Process for Blocktopia in Thailand 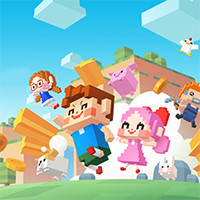 Nurhyme Games, a company created by Korean developers that are veterans in the field of game, is creating a second generation blockchain gaming metaverse.

Korea is known to be a country that is highly skilled in the gaming field and also owns the world's fourth-largest game market.

Blocktopia, in development by Nurhyme Games, is a game that has the combination of voxel graphics and MMORPG features.

In addition to the concept of P2E (Play to Earn) and P2O (Play to Own), blockchain technology was applied to strengthen the ownership of gamers suitable for the WEB3 era. Also, it is planned and developed to increase participation in gamer live service.

Although there are existing P2E, P2O games, and coin-based gaming metaverse, "Blocktopia" is a concept that applies both and lowers the psychological access burden with voxel graphics. The project is drawing attention from early stage VCs and accelerators in the U.S., as well as the Korean and U.S. game industries.

Nurhyme Games will release TBD as early as the first half of next year.

It is known that all CBTs (Closed Beta Testings) will be carried out simultaneously in major Southeast Asian markets such as Thailand, Vietnam, the Philippines, and Indonesia, and North America, Korea, Japan and Europe.

Original Source: Nurhyme Games is in Development Process for Blocktopia in Thailand