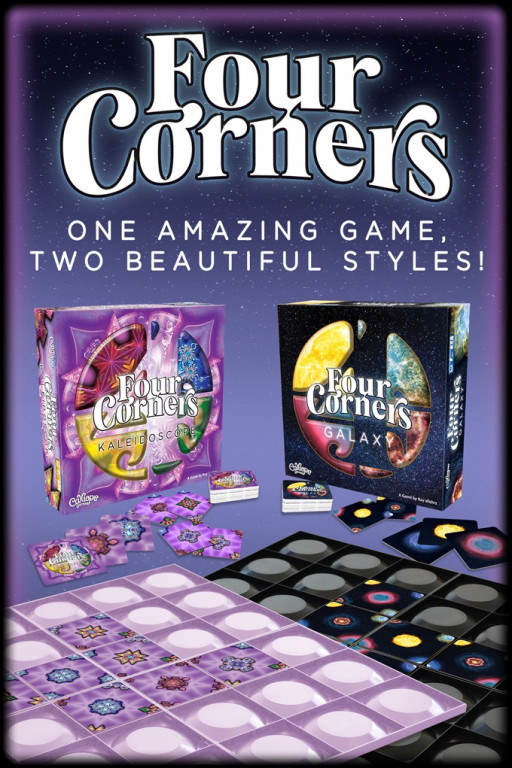 Full of eye-catching artwork sure to dazzle players of all ages, Four Corners will be going live on Kickstarter Tuesday, Jan. 24, at 10 a.m. EST with not one, but two versions!

Using their innovative, modular, Tip-Pivot gameboard, players can easily place, rotate, move, and swap tiles—all without affecting the rest of the board.

Each player is given three secret goals. The winner is the player who best manipulates the board, adapts to changing strategies, and completes their goals first.

By supporting this campaign, gamers around the globe can be the first to own this revolutionary game in two different themes: Galaxy and Kaleidoscope. Backers will also receive a special thank you in the form of a Calliope Exclusive Tile Bag. With three different ways to play the game (standard, teams, and solo) and two aesthetics to choose from, there is a combination to suit players of all ages and interests.

Regardless of which theme you choose, Four Corners features the same quick-to-learn gameplay; it's up to each family to choose the theme that's right for them. Will their next game night set sail for the stars, or travel through time with a nostalgic toy?

Over 10 years ago, Calliope Games began as a collaboration between Dawne Weisman, Jordan Weisman, and Ray Wehrs. Calliope Games has been producing and selling quality tabletop games ever since. Calliope products are inspired by families, for families. While they are most readily known for their Tsuro and Roll For It! game lines, they have successfully released 24 titles, many of which were brought to life on Kickstarter.

With both current and future gamers in mind, their designs make the perfect gateway to the tabletop hobby. Calliope games are excellent for starting out game night and are easily played between heavier games. They focus on entertaining adults while allowing children to compete with their parents without a single game "thrown". It's really a simple concept; instead of having parents step down into the child's world, these games invite the child to step up into the parents' world.

Calliope games are easy to learn, play in under 60 minutes, and provide a fun and engaging experience for players of all ages.